On the day for raising the Dou Mu Heavenly Lamps, the temple committee members will decorate the dragon staff and phoenix staff by attaching it with some ornaments and a lantern with the words “千百子孙” (an abundance of descendants) painted on it. 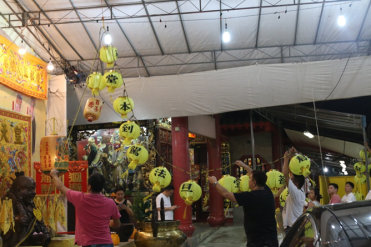 The members of the temple committee held on to a long rope attached with yellow lanterns and released it accordingly as the pulley system, which was needed to raise the lanterns and lamps, was being set up.   Accessories such as a black flag, an abacus, an image of a heavenly stork, a calabash, a straw hat, a string of antique Chinese coins and a sword were hung at the end of the rope.

While awaiting the arrival of the Guan Yin Da Shi 观音大士, the temple committee members changed into the traditional mourning outfit (丧服) ). They also wore a white headcloth and tie a yellow cloth around their waists. Mr. Tan and Jenny, being the guardians of the dragon staff and phoenix staff respectively, were the only ones who wore straw hats (草帽) and straw slippers (草鞋) in addition to the mourning clothes. 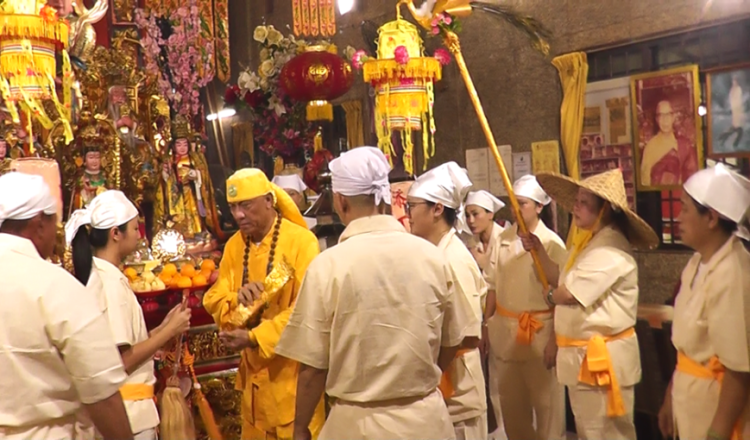 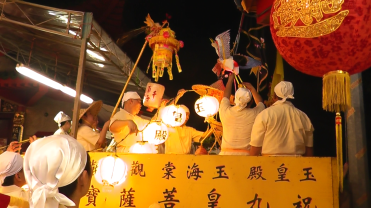 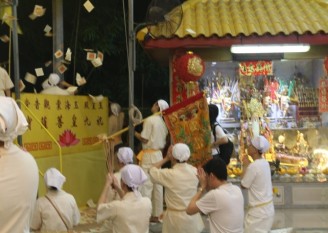 They then proceeded to the Dou Mu altar (an elevated platform) to conduct the ritual for the raising of the Dou Mu Heavenly Lamps.  The committee members all knelt down as instructed, throw joss paper at the Lamps as they were being raised.  The Lamps were gradually raised to the upper reaches of the metal pole.  The yellow lanterns and accompanying items were raised at the same time.  Thereafter, the committee members and devotees rubbed the joss paper on their bodies to pray for good fortune.  The role of the Lamps was similar to that of a beacon, to signal to the deities that the temple was celebrating the festival of the Nine Emperor Bodhisattvas.