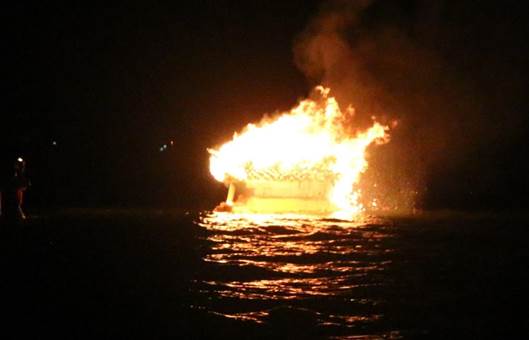 On the evening of the ninth day of the ninth lunar month, a burning boat lit up the shore of Changi Beach. The boat is consumed by fire, quickly sending nine divine beings on their journey back to their celestial abodes. This send-off ritual is none other than the closing of the divine beings’ nine-day sojourn into the human world during one of the biggest Taoist celebrations in Singapore, the Nine Emperor Gods Festival 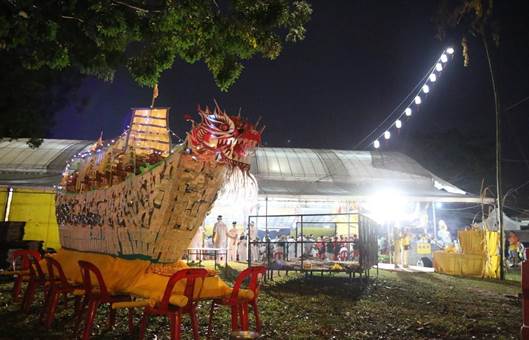 Being a fairly young home temple, Yu Feng Jiu Huang Dian (玉封九皇殿) has nine years of history. It was founded on December 2008 and originally located at Jurong West Street 41 (where it held its festival). Before moving in 2014, to 347 Jurong East Ave 1, where it would occupy a large open area temporarily for nine days. While there was a change in venue, it did not prevent Taoist devotees who stayed around these area from gracing the event. Many came to pray for the Nine Emperor Gods’ blessings and some even followed this temple from its original venue to volunteer at the festival. 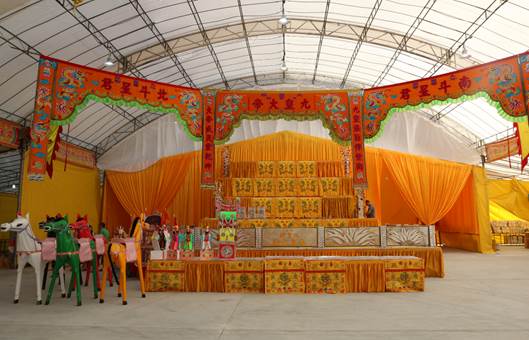 The Nine Emperor Gods Festival is held from last day of the eighth lunar month to the tenth day of the ninth lunar month. However, preparations for the festival had started early, starting from scratch, the setup of the five-storey altar, banners, the five coloured flags and some deity costumes at the side. 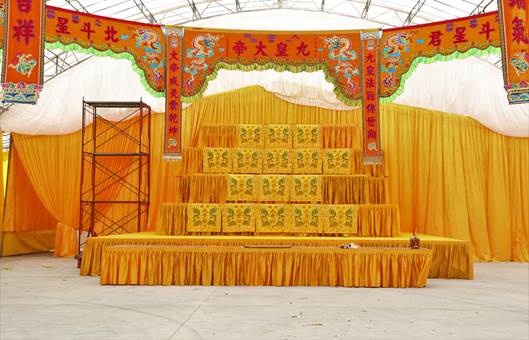 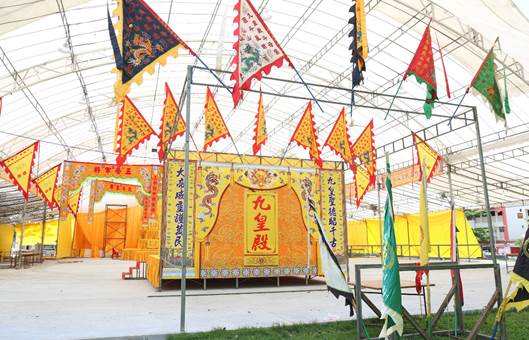 Wide view of the tentage from the outside 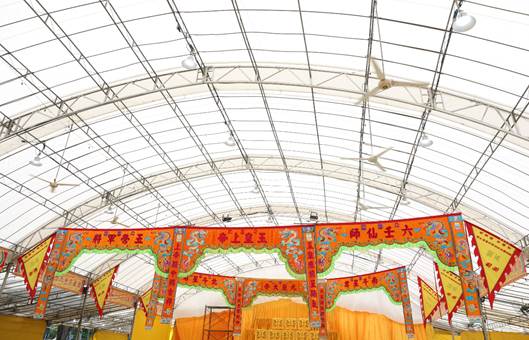 The altar is fully installed with yellow fabrics clothing the five storey altar, along with the five flags and a long banner across the tentage area. The five flags hung at the pinnacle of the altar, represents North, West, Central, South and East. 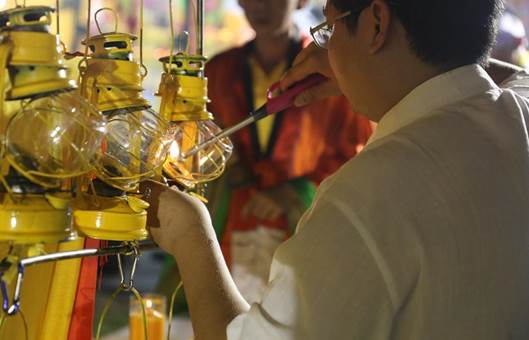 Temple founder lighting up the lamps

The heavenly lantern is raised with a tall bamboo in a bid to guide deities and gods to the celebration. It has to be a 15years old bamboo and is strong, tall and straight in order to withstand the nine-day celebrations.

During the process, a hole is dug for the bamboo, where rice and wine are placed in it. The Taoist priest would chant a prayer and place a ‘fu’ amulet into the hole. An interesting procedure notable is the blessing of the area then insert the bamboo into it. 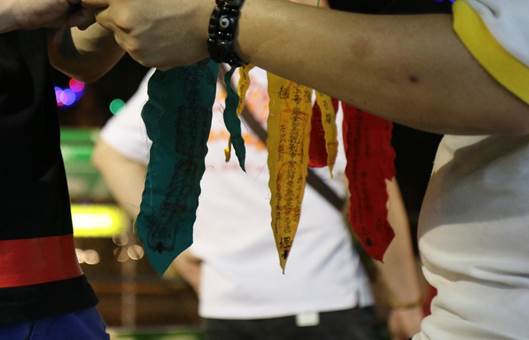 Religious inscriptions to be attached to the bamboo 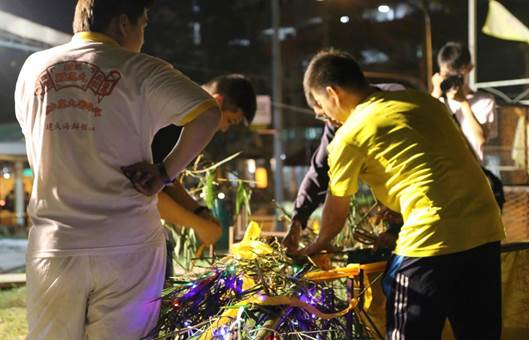 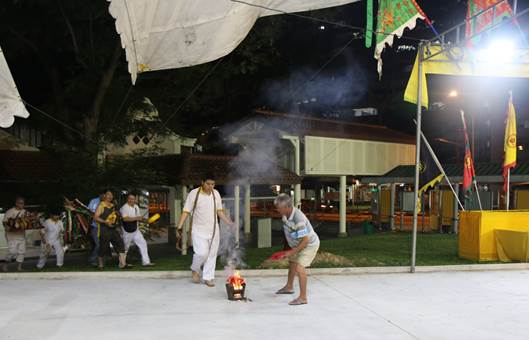 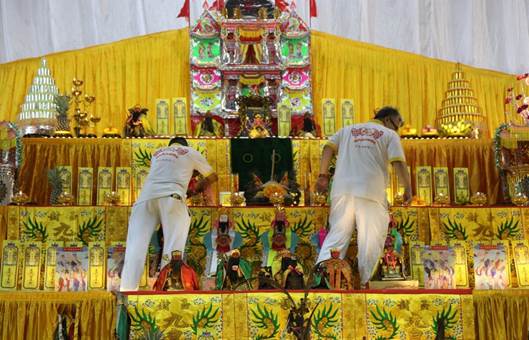 Temple members carefully placing the statues to the respective positions 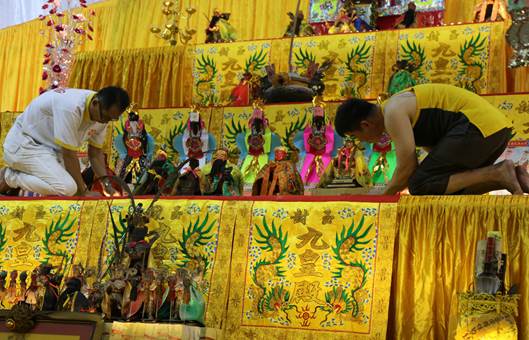 Temple members ensuring the statues are placed orderly and neatly 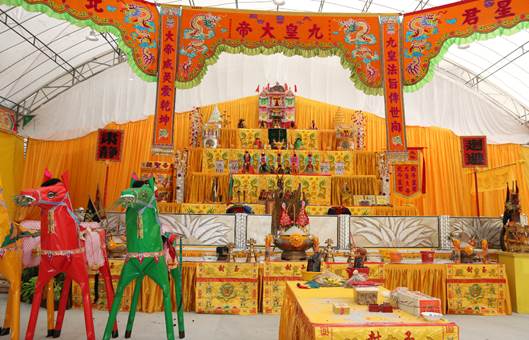 The preparations also included other Gods who were invited to this festival. They include the gods from heavens and earth from 三清、三公、六壬、大伯公 、众仙. 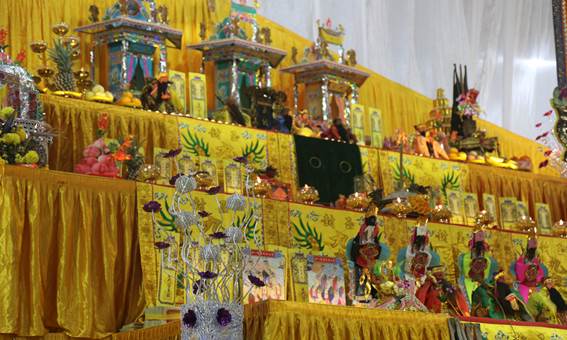 A close up of some of the deities