After the Nine Emperor Gods Festival, Hong San Keong Management Committee and the seven affiliated committees held post-festival celebration banquets to express appreciation for the generosity of the sponsors and supporters and the hard work and contribution of the temple volunteers and committee members.  Starting from 30th October by Hong San Keong Management Committee, then the seven committees would take turns to organize the banquet for seven consecutive evenings until 6th November. There were around one hundred tables every evening with delicious food and wonderful Getai entertainment. Some also had charity fundraising or bidding. The last banquet was organized by Lao Cai You Association with one hundred and thirty tables and it was also the evening with the most participants. After the eight consecutive banquets, the post-festive celebration had finally come to the end.  Everyone looks forward to meeting each other again in the next Nine Emperor Gods Festival. 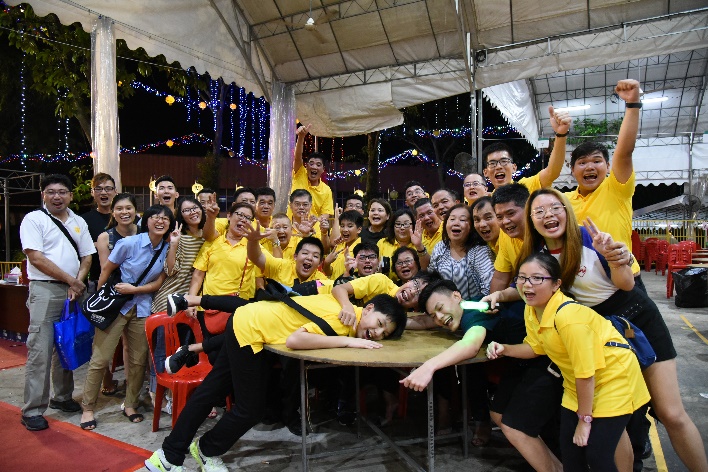 After the hard work during the festival and the heartily enjoying together at the post-festive banquets, we look forward to meeting and working together again next with the blessing of the Nine Emperor Gods.

Overall, the major themes of the festival at the temple include networks/communities, material culture, committees and its rituals and traditions. In Hong San Temple, there is a sense of community spirit among the devotees and the committees’ members. Such community-based culture has widened its members over the years. Initially, recruitments of the committee members only restricted to those who lived in the Charn Mao Hern area. However, the rules gradually waned and the temple now gladly welcomes passionate believers from all walks of life. Not only do they have a strong community spirit within their old kampong area, they are also welcome new members with open arms. Moreover, they maintained strong networks with the villagers, the believers and even the companies ever since it was established. Hong San Temple has its unique points as compared to other NEG temples, for instance, their Yew Keng only happens once in every three to five years. Furthermore, the members of the committees from the older generation all came from the same kampong and portray the spirit of togetherness as a family.

Moving forward, Hong San Temple has recognised the need to recruit younger members into its committee–in order to preserve the Nine Emperor Gods culture–for many temple elders have started to retire. They have a Youth Wing dedicated for devotees from the younger generation. The Youth Wing will also look into the efforts to groom future leaders. Other committees such as the Silver Turtle committee are also recruiting younger members actively. Although Hong San Temple does not have a strong social media presence yet, there are signs that they will be looking to do so in the near future. With increased membership from the younger generation, they might set up an official Instagram or Facebook page to share its culture during future Nine Emperor Gods Festivals!

As a whole, attending the Nine Emperor Gods Festival was truly an enriching experience for us all. Most of us attempted strict vegetarian diets for the first time and through the course of the project, we made mistakes and gained knowledge on the temple’s organisation and of course, the festival itself. All in all, we are glad to participate in this research project and, most importantly, are sincerely grateful to Hong San Keong Management Committee and all affiliated committees giving us the opportunity to widen our perspectives and dive in deeper into understanding the cultural and religious aspects of Singapore.

Our very sincere thanks to the committee of Hong San temple for their support and assistance during our documentation project.