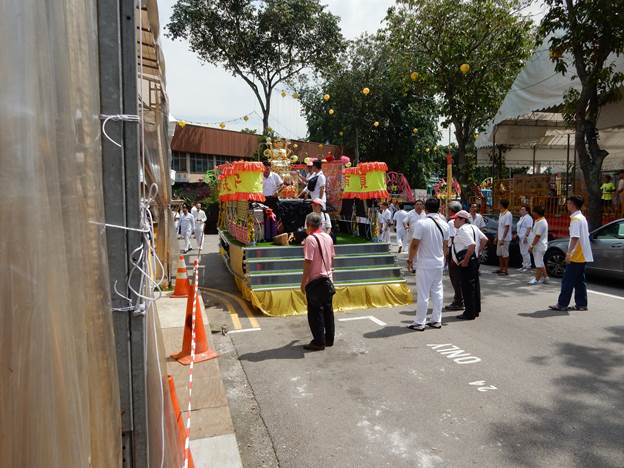 Mazu did not leave the truck, but stayed outside. Meanwhile, the Hong San Temple committee greeted the Nanbei Doumugong representatives.

The Nanbei Doumugong representatives then departed with incense ashes and joss sticks from Hong San Temple.

The Consecration of the Peaceful Bridge (19th October 2018) 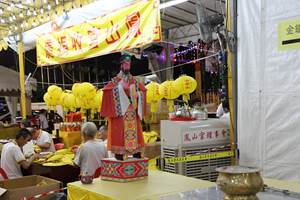 The Peaceful Bridge and deity (unsure who it represents), to which worshippers can cross the bridge and get a chop. This chop represents one having been blessed. 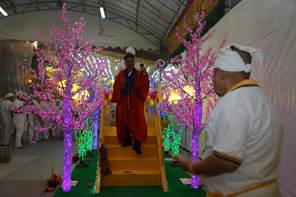 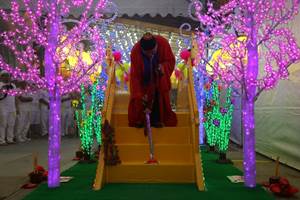 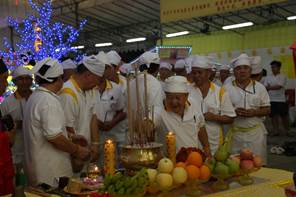 The consecration of the bridge should have performed at 11PM that night. As Hong San Committee members were also embarking on their trip to Ampang Nan Tian Temple 南天宫 to invite incense, the consecration was brought forward. The priest performed the opening of the bridge by summoning the celestial generals and soldiers to protect the site then led the members to cross the bridge and being chopped on their backs blessing them on their Ampang trip.

Upon reaching Ampang, everyone walked barefooted upon arrival. Hong San Committee members were welcomed by other the Nantian Temple Committee outside. 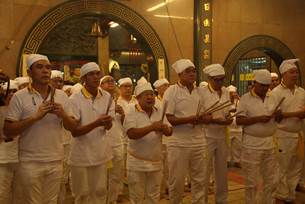 The Lor Zu then stepped forward and knelt in front of the inner chamber. He offered incense and candles to the Nine Emperor Gods. The Nantian Temple Committee members handled some stuff (either the ‘joss fire/ashes inside the basket or the red packet). 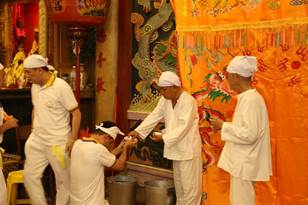 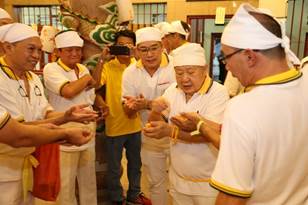 Hong San Temple members lined up to receive the tea from a small praying cup from the Nine Emperor Gods. Thereafter, cloth amulet was distributed to them. 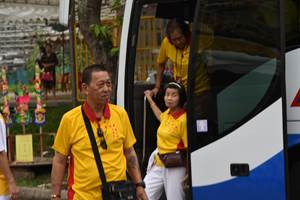 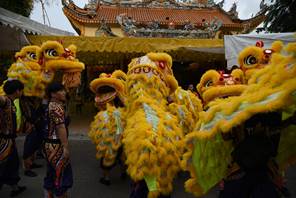 The Lion Troops performed first, and paid their respects to the deities in Hong San Temple. 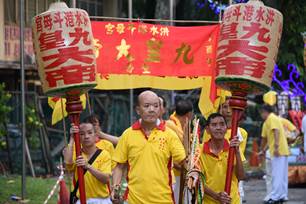 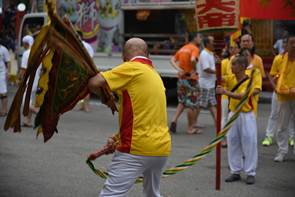 The man (Left) cracked his whip thrice. Following that, the Jiazhuikang Kew Ong Yah Temple committee, with their Lor Zu, proceeded to pay respects to the Nine Lamps. 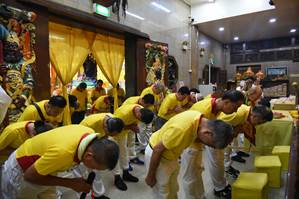 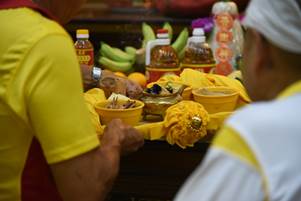 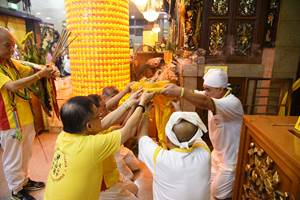 Formalities and incense were exchanged

The end of the Hong San Keong visit and proceeded to the next temple. 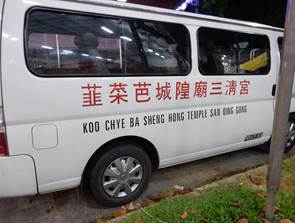 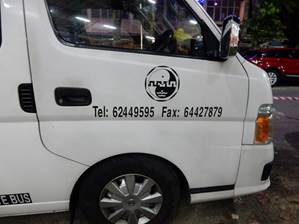 The Taoist priests arrived in the buses, along with the vehicle above.

The Taoist Association arranged for the priests to come to Hong San Temple to bless the temple. This is done every year.

The chanting session was like an orchestra. The priests dressed in red ‘sang/chanted’, while the ones in White played Chinese musical instruments. The lyrics were in accordance to the Taoist book of Quan Zhen Jiu Huang Chao Ke edited by Master Huang Xin Cheng. 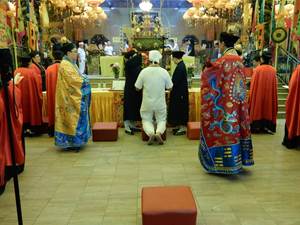 The Hong San Temple’s main Lor Zu was involved in parts of the ritual. He represented Hong San Temple during this ritual, and received blessings on behalf of the temple. 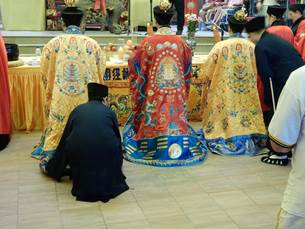 The session lasted an hour, and the 3 priests leading the way (2 golden robe, 1 red robe) had 2 ‘assistants’ (in black). The HSK Lor Zhu prayed behind the 3 leading priests.

Many devotees arrived in Hong San Temple around 2100H, anticipating the arrival of Hougang Tou Mu Kung as part of their yew keng. 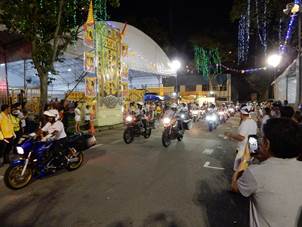 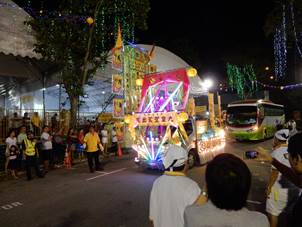 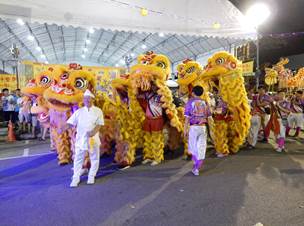 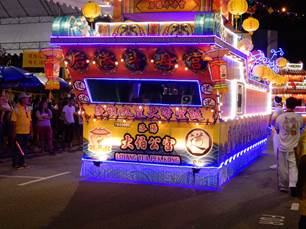 More floats, and the 5 Generals (on stilts)

Members of Shin Sen Keng proceeded down their buses and formed a line. The main committee members carrying the incense urn and other ritual objects were preceded by a drum and gong team 金鼓队, playing drums, cymbals, and gongs, and a person leading using 2 clapper blocks.  The whole contingent was led by a vanguard 先锋, who carried a magic whip 法索.  At the entrance to the temple, he cracked whip three times times in each of the cardinal directions, before cracking it five times in the centre, to clear the way for the entrance of the visiting contingent.  They paid respects first at the Nine lamps, before going into the main prayer hall where they paid their respects to the Nine Emperor Gods and exchanged incense.

The Shin Sen Keng with their drums and gongs showing their respects by kowtowing 3 times.

The Shin Sen Keng committee members then exited the main prayer hall and proceeded down the steps.  The head of the temple handed the two flags he was carrying to the vanguard. A performance called Chow Yah took place, to which was a martial display representing the five camps. Thereafter, the Shin Sen Keng contingent said their goodbyes to their friends from Hong San Temple.