Founded during the post-war era, Charn Mao Hern Kew Huang Keng (葱茅园九皇宫) was originally located in a kampong known as Lemongrass Garden, or Charn Mao Hern (葱茅园) near Jalan Alsagoff.  The kampong was located around present-day Paya Ubi Indutrial Park in the eastern region of Singapore. Two major linguistic groups make up the majority of the Chinese ethnic residents of Charn Mao Hern, with Hokkien speaking community residing in the northern area of the kampong colloquially called Shang  Ba (上芭), or the upper region, and the Teochew speaking community residing in the lower  Xiaba(下芭) colloquially known as Xin Ba She (新芭社). Airport Road served as a boundary between them.

Prior to its relocation to its present location along Arumugam Road, the Nine Emperor Gods Festival was a communal event which involved the participation and mobilization of the entire kampong. Devotees recount how the entire community would come together and partake in the preparation and celebration of the Nine Emperor Gods Festival. Devotees from Charn Mao Hern would start their vegetarian diet together and residents would take turns to cook the meals for each other. 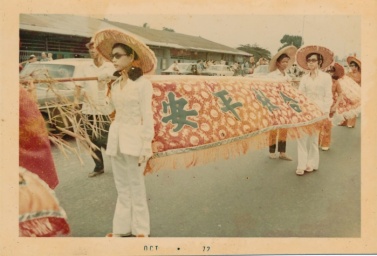 During the festival, men would often partake in more laborious activities such as the carrying the palanquins whereas women and children would take on less labour-intensive roles such as being flower-bearer or flag-bearers during the procession. The Nine Emperor Gods Festival is often celebrated on the same scale as major events such as Chinese New Year, where the local school Hua Nong School (公立华农学校) would suspend classes in order to accommodate the festive celebrations as a majority of the students were involved in this festival. 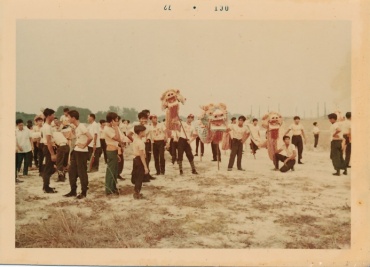 Charn Mao Hern Kew Huang Keng was eventually forced to relocate as a result of Singapore’s urban redevelopment plans in the late 1970s and many of the residents of Charn Mao Hern were subsequently relocated to various Housing Development Board (HDB) estate clusters(Eunos Crescent, Haig Road, Sims Drive, Bedok North). In 1986, the temple shifted to a temporary holding site off Arumugam Road. During this period, Charn Mao Hern Kew Huang Keng was approached by the Teochew temple Cheng Hong Siang Tang (众弘善堂) to establish a combined temple together. Thus on 27 October 1990, the combined temple named Cheng Hong Siang Tng Kew Huang Keng (众弘善堂九皇宫) was officially completed and inaugurated at its present location along Arumugam Road

The temple is organized into seven committees; one main committee and six sub-committees, each holding specific roles and performing significant functions in the festival.

Overseeing all the other sub-committees is the Li Shi Hui (理事会 [Main Council]). This council consists of the most senior members of the temple and makes the final decisions on matters related to the temple or the organization and running of the festival.

The other six sub-committees are: 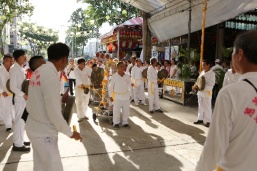 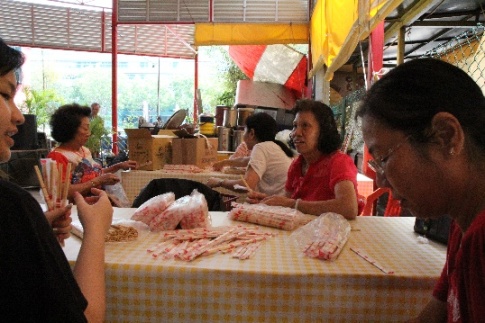 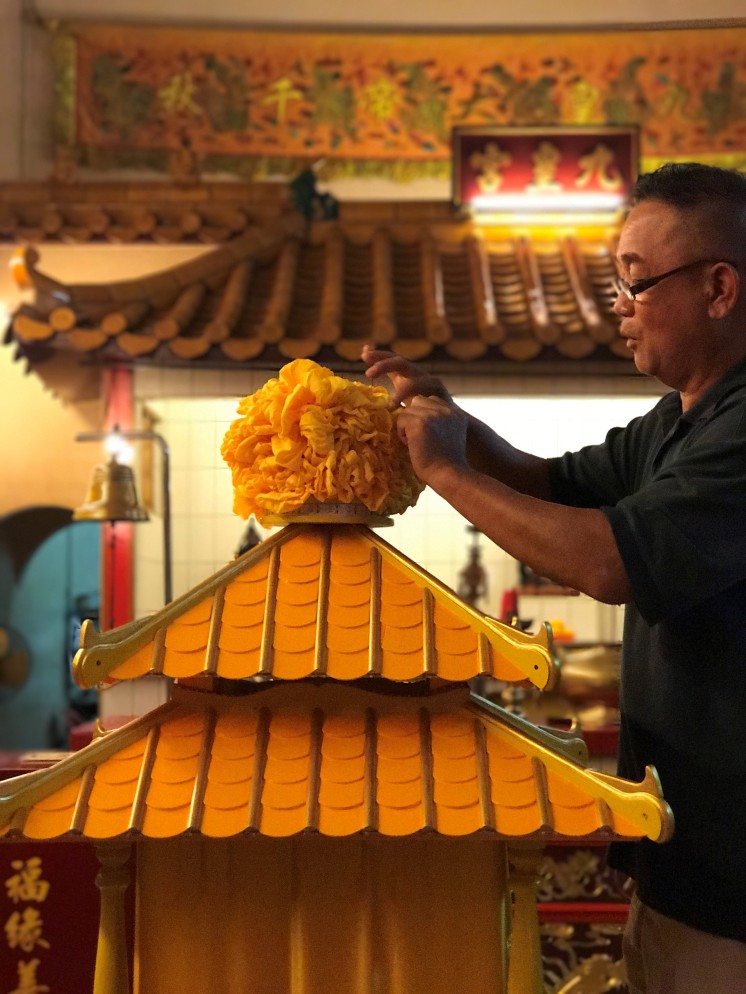 The making of a flower ball is a complicated, time consuming and laborious process which takes around an hour and a half for a seasoned craftsman to create and twice as long for an inexperienced craftsman to complete one. The technique for making the decorative flower ball has been passed down from generation to generation and it has become a source of pride for the craftsmen who feels honoured being able to preserve this form of tradition. Similarly, many of the other devotees of Charn Mao Hern Kew Huang Keng also take pride in the preparation for the Nine Emperor Gods Festival as it provides them with a sense of spiritual fulfilment performing the various activities which they feel helps them connect with the deities. 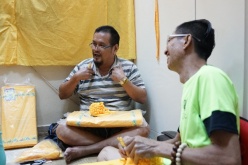 However, there are certain restrictions and strict requirements which need to be adhered when making the yellow balls. The craftsmen must go on a vegetarian diet before they are allowed to make the flower balls.   Only selected male volunteers are allowed to make the yellow flower balls.  Female volunteers are prohibited from participating in this task.  The completion of these decorative pieces spans over several days as many of the craftsmen are mainly members of Xiang You Hui who volunteers their personal time after work to help complete the weaving of the flower balls.

Construction of the Bridge 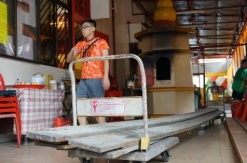 Another key preparation for the Nine Emperor Gods Festival that is unique to Charn Mao Hern Kew Huang Keng is the construction of the wooden ramp also known as the bridge. Constructed three weeks prior to the festival, this bridge serves both a functional and symbolic purpose. Functionally, the bridge extends the entrance of the temple so that the palanquins, participants and devotees can make easy ingress and egress during the festival. Symbolically, the bridge represents the connection of the celestial and the human/natural world. 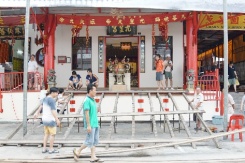 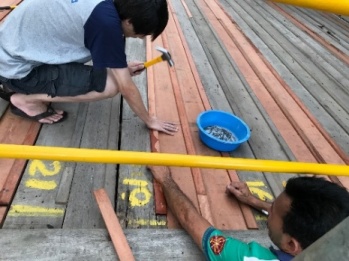 Once done, thinner wooden planks are subsequently placed upon the base and hammered in individually which act as additional footing for people to walk up the bridge. Once complete, the yellow metal railings are then welded into the structure. The entire process took over four hours to complete, however, while the task is backbreaking and laborious especially under the sweltering heat, the temple insist on constructing the entire bridge by hand rather than hiring external contractors as this activity allows them to retain the kampong spirit where everyone come together to help each other just as they did in the past.