During the festival, the five directional army troops are responsible for the protection of the outer and inner altars. The five troops are represented by five different colours – black, white, red and green. The temple member in charge of the kao jun ritual would chant the Wu Ying Chant (五营咒) and wave the different coloured flags in a uniformed way.

The kao jun ritual signifies the opening of the pathway for the deities to arrive at the festival. For the subsequent nine days,Kao Jun ritual is conducted twice a day.

Kao犒 in chinese means kao shang犒赏 to reward heavenly army with food drinks. Food is prepared twice a day to reward the heavenly army and its companying heavenly horses, to thank them for protecting the festival premises.

To kick off the Nine Emperor Gods Festival, the Gods are invited to earth. The bulk of the first day of celebrations is spent on making the final preparations for the ritual to be held in the evening.

All devotees that are participating in the receiving ceremony must wear a full white attire. There are three reasons given by the temple member that, (1) when a group of people in white stand along the beach, they will scare off the pirates, (2) the Nine Emperor Gods like white colour and (3) it is to give respect to the ancestors. They will also have to tie a white cloth on their forehead and tie a yellow band around their waist. Both the white cloth and the yellow band are stamped with 九皇大帝 Nine Emperor Gods in red.

Stamping the white cloth to be given out to the devotees

One of the temple members explained that wearing a white cloth could ward off yin energy that lingers within one’s forehead, which explains why the white cloth is eventually disposed after the ceremony and thrown into the dragon boat to be sent away. 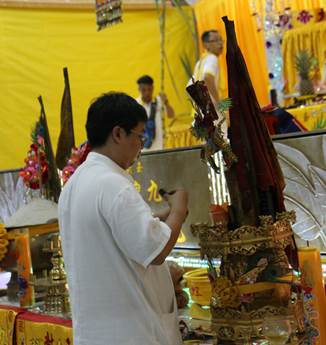 At the Changi Beach

Once the preparation is completed, the devotees make their way to Changi Beach to invite the gods. Inviting the Nine Emperor Gods is a much anticipated affair. Before the procession arrives, over a hundred devotees have already gathered.

The ritual involves the Taoist priest leading the devotees in prayers, and subsequently, the gods are invited to earth.

At around 9pm, representatives from the temple went into the water with the sacred urn to invite the Nine Emperor Gods. The urn is where the spirits of the nine gods will be residing in and it will be kept inside a sedan chair. Swinging of the sedan chair from side to side is to signify the gods’ presence. The whole procession is very loud and lively.

The Nine Emperor Gods have been invited.

Back at the temple, the sedan containing the urn with Nine Emperor Gods’ spirits is brought into the inner palace to rest the gods. According to one of the members, only members of the temple committee can enter the inner palace and all of them must have followed a strict one month vegetarian diet to cleanse their bodies.

Sedan chairs arriving back at the temple

During the nine days of celebrations 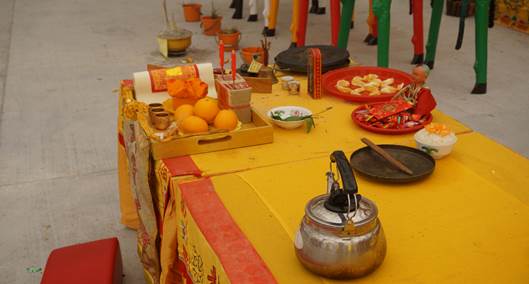 Red child placed in the middle of the altar

During the nine day celebration, there are events happening at the festival such as traditional puppet shows. The puppeteers will first pray to the gods before placing a red child at the altar before starting their performances. At the end of the performance, the temple members will return the red child to the puppeteers.

For the changing of luck ritual (改运仪式), the Taoist priest would use a 改运本子and paste the possible bad omens on the amulet, thereafter reading out these bad omens and disposing them in the fire, to change one’s luck for the better. Also, this ritual helps to brighten one’s constellation or star group and pray for good luck and fortune. 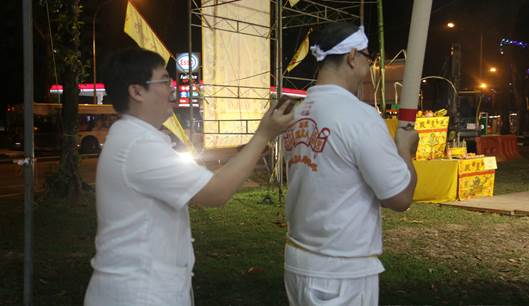 After crossing the bridge, devotees receive a red stamp on the back of their shirts

A close up on the red stamp that says 九皇大帝

Before crossing the Ping An bridge 平安桥 (Bridge of Blessing), the Taoist Priest would consecrate the bridge (开光), before leading the devotees according to their Chinese Zodiac signs to cross the bridge. The devotees did it in an orderly fashion as the temple members have made sure they split into smaller groups to ensure all gets to do their prayers. Crossing the Ping An bridge helps to bring good luck and blessing to its devotees ensuring that they have a good year ahead.

Dragonboat before the sending ceremony

The much-anticipated dragon boat is decorated with devotee’s wishes on the outside. While on the inside, there is actually a secret compartment where temple members place rice, gold ingots, cloth, wine. The significance of the dragon boat is to send devotees wishes and offerings to the celestial heaven and to get rid of bad energy and in return pray for good luck and prosperity and peace.