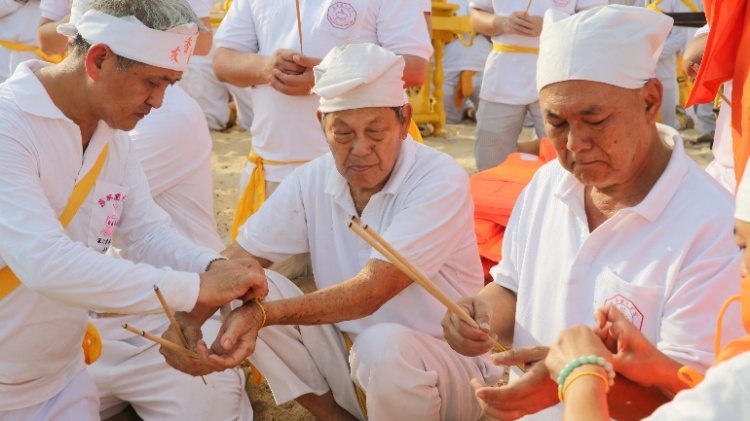 Similar to the Receiving ceremony, the Taoist priest would perform his chanting while reading from the pink piece of paper for approximately fifteen minutes while the ceremonial party along with devotees knelt and prayed with joss sticks. At the cues the Taoist priest, the ceremonial party would be handed the incense paper which they would bow with it towards the sea before passing it on to the other temple members to burn in the makeshift furnace as offering. 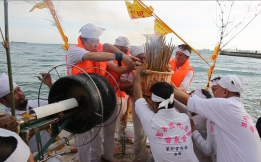 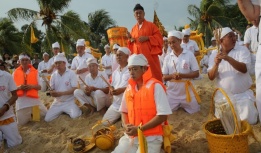 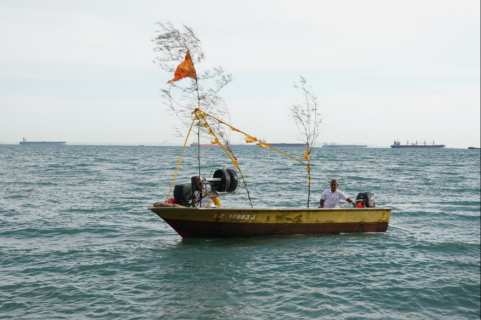 As the chanting neared towards the end, the main temple members helped each other to remove the yellow cloth wristbands which they had worn since the Receiving which they would later burn in the makeshift furnace, signifying the cleansing of the year’s wrongdoings. 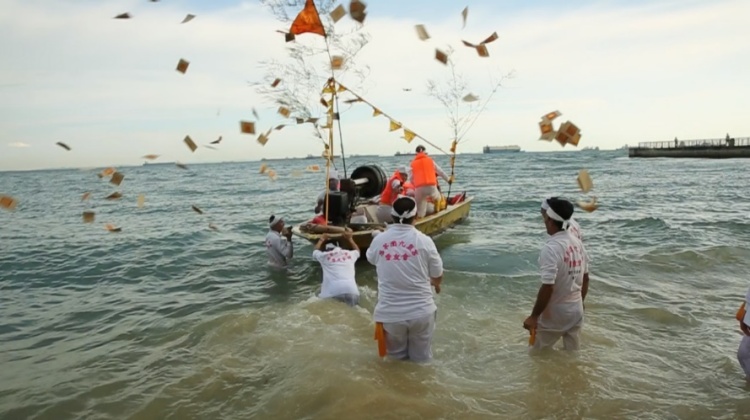 Once all the wristbands had been removed, the joss sticks from temple members were collected and inserted into the urn, filling it up completely while the some of the joss sticks were stuck into the sand to create a corridor from the offers towards the ‘gateway’. Next, the temple members and urn-bearers begin to don their life-vests while in the distant, a motor boat adorned with three young bamboos tied together with yellow cloth with triangular banners with a red flag atop approaches the shoreline. 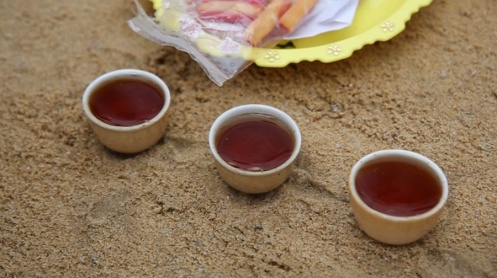 With the aid of several temple members, the main urn-bearer and assistant bearers carried the urn and headed out into the sea to board the boat. Once onboard, the boat then departs outwards to the sea where the bearers would release the urn into the middle of the sea, signifying the sending off of the Nine Emperor Gods. Temple members aboard the boat would then toss incense papers into the air as the boat departed from the shoreline. On the shore, devotees started crowding around the offering, attempting to catch a glimpse of the tea cups in which tiny fishes ‘miraculously’ appeared swimming in the teacup. 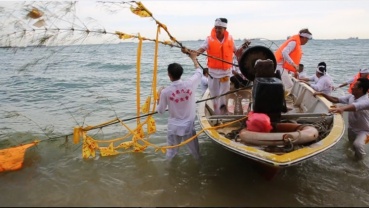 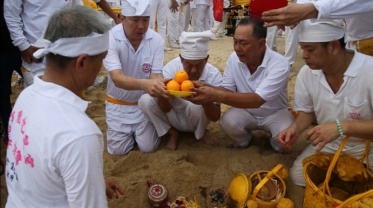 As the boat returned back to shore, temple member ashore went out to hold the boat in place as the urn-bearers got off the boat while other temple members help to dismantle the bamboos decorations on the boat. Other temple members could be seen joyously celebrating the end of the Sending off ceremony by playfully splashing water and pushing each other into the sea. The main urn-bearer and assistant bearers then proceeded back to empty the teacups and thank the deities with the offerings before keeping it. Once everything had been kept, the entourage made their way to the carpark to return back to the temple. 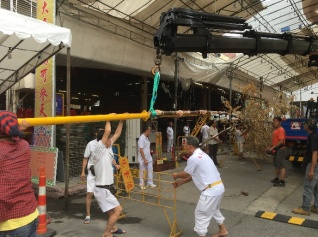 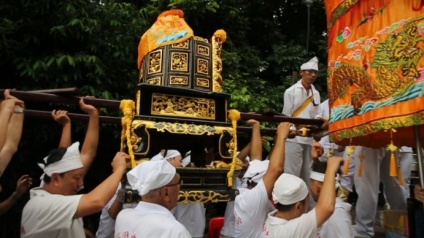 This concludes the Sending Off ceremony, however, the festival is only officially over with the lowering of the nine lamps which was done the next day in the morning at 10am. The temple thus resumes its original state with all yellow objects, (such as fabrics, lanterns, and candles) removed and replaced with the regular kind and the cessation of the vegetarian diet. 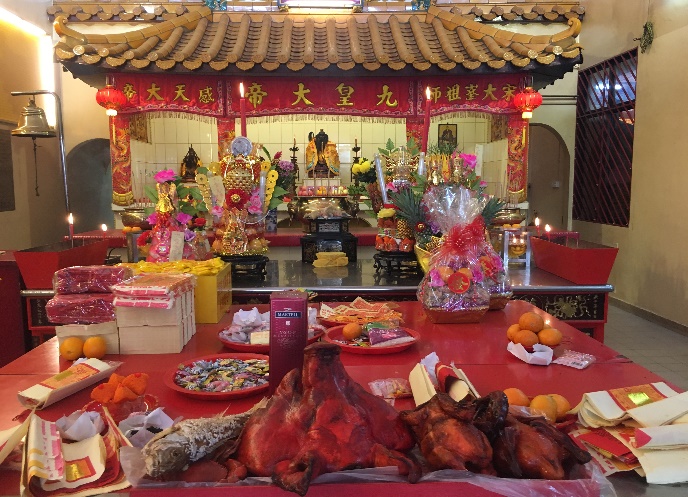 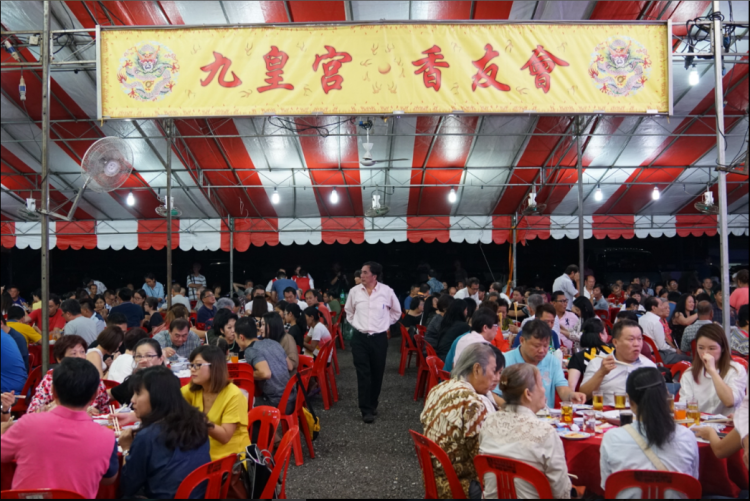 After the Nine Emperor Gods Festival is over, the temple holds elaborate banquet dinners to thank the various groups for their help during the festival. The first group to celebrate the dinner were the main temple committee (九皇宮理事會) and follow by sub-committee group(歌炮會, 诚⼼會,音乐會, 香友會, 诚敬會) which spanned for several nights. Often some form of entertainment is provided during the dinner such as musical or opera groups to entertain guests during their meals. 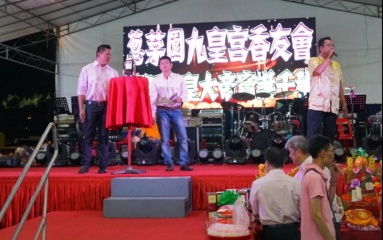 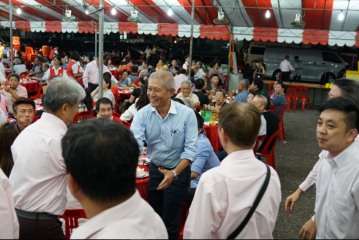 In addition, the dinner is usually accompanied by an auction which acts as a source of fund-raising for the temple. Items auctioned off include alcohol and spirits, decorative ornaments and items used during the festival such as the lanterns or the robes worn by the Nine Emperor God statue. During the festival, the main temple members go around table to table thanking the guests for coming and for their participation in the festival.

Overall, the festival had been an interesting and eye-opening experience as prior to the documentary project, we had not heard of the Nine Emperor Gods Festival nor how it was being celebrated here in Singapore. Thus, being able to interview the participants and document the festival first-hand has truly been an insightful and special privilege to learn more about this unique cultural heritage.

While Charn Mao Hern Kew Huang Keng has faced many challenges over the past few decades with the rapid modernization of Singapore, it is heart-warming to learn that the community’s strong relationships and bonds with each other continues to persevere till this day despite the various setbacks. The Nine Emperor Gods Festival not only acts as a means of celebrating the deities coming, it also serves a secondary function of allowing the dispersed kampong community to maintain and rekindling relations with each other every year.

Without the community, the celebration of the festival would lose its meaning and significance. Thus, while the temple continues to make a commendable effort in preserving these traditional practices, the rapid changes in society and increasing rise in secularism amongst Singaporean youths in recent years is clearly taking a toll on the temple and its aging members who hope to pass on their knowledge and traditions to the next generation. 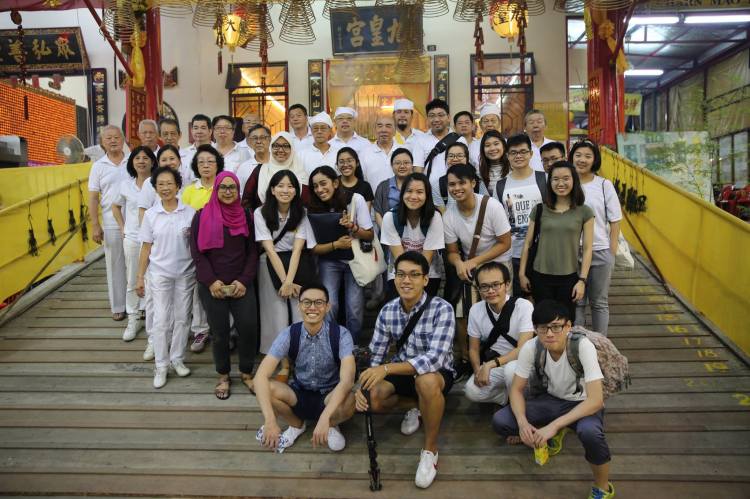 Hopefully, through this documentary project, this unique aspect of Singapore’s Chinese heritage and traditions would not only be preserved for future generations but also serve as a means of providing Singaporeans with a glimpse of what Singapore’s past was like through the lens of the Nine Emperor Gods Festival.

Our very sincere thanks to the committee of Kew Huang Keng temple for their support and assistance during our documentation project.